Founded in the spring of 1994, by entrepreneurs Ben Sproul and Steve Pauls, The Pit is one of the most well-known surf shops on the Outer Banks of North Carolina.

Sproul and Pauls spent many years on the Outer Banks before they ever started their own business. In college, the two waited tables and surfed around the Outer Banks every summer, enjoying the Outer Banks lifestyle. After college, they went separate ways to chase careers related to their fields of study; Graphic Design and Marketing.

For many years they longed to return to the old days on the Outer Banks. It wasn’t until they reunited as groomsmen in 1993 for a friend’s wedding that they formed the crazy idea to open their own surf shop on the Outer Banks. So, in the spring of 1994, these two entrepreneurs opened the doors to a tiny shack on the beach road and started selling used surfboards, t-shirts, and other surfing apparel.

Over the next few years, this crazy idea between friends evolved into one of the Outer Banks’ most famous businesses. They moved out of the tiny shack in 1996 to an old log cabin on the bypass, which eventually turned into a local hangout, featuring live entertainment, light munchies, and dance DJs. In 1999 and 2000, they moved the log cabin to a new location and built a beautiful 3000 sq. ft. surf shop.

Business was very good, but after years of work Sproul and Pauls decided they wanted to get out of retail and focus on their restaurant, Boardriders’ Grill. So, they contacted MidStreet to discuss their options.

With a large selection of popular brands such as Quicksilver, Roxy, O’Neil, Ripcurl, Reef, Billabong, Lost, Oakley, and Volcom, the surf shop attracted a number of qualified buyers. The business sold in 2012 for the full asking price to Missi Dermatas.

Dermatas has lived on the Outer Banks ever since and continues to grow the business and cultivate the welcoming environment that made The Pit surf shop what it is today.

The Pit Surf Shop is still located off the bypass on the beautiful Outer Banks of North Carolina, and they continue to offer surfing, skim boarding and standup paddleboarding lessons to the visitors on the Outer Banks.

From the first time surfer to the surfer wanting to improve their competition skills, The Pit Surf Shop surf lessons can help! 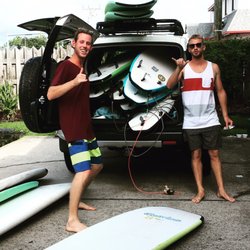 "It was an honor to represent one of the Outer Bank's most iconic surf shops. Ben and Steve built a very recognizable brand, and I know Missi will take their hard work to the next level."

All Star offers several types of insulation to residential and commercial customers on the Carolina coast.